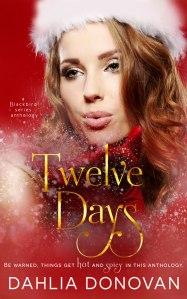 ‘You are cordially invited to the annual Blackbird Security Firm Christmas Bash to be held at the penthouse, hosted by our mate, and yes, you all have to bloody attend.’

Spending an hour staring in horror at a party invitation wasn’t exactly a productive use of her time, but Elaine had been hiding in her office all day thanks to losing a bet to Darren the week before. They’d made a less-than-friendly bet about a game of Battlefield which she’d ended up losing. Bollocks. It meant instead of Darren finding a way to get everyone to leave her alone for the holidays, she was forced to wear hideous holiday jumpers until Boxing Day.

Hideous might’ve been a bit of an understatement. Twelve days of holiday jumper monstrosities, Elaine had no idea how she was going to make it through to Christmas. She might have to call in sick for a few days. The blaring colours were certainly making her feel nauseous today.

Elaine had been trying to sneak out of the offices and stopped to turn slowly toward Gareth who was leaning out of his office with a smirk on his face. “No.”

“I haven’t asked anything.”

“You called me ‘Gibbsy’ which usually implies you think you are about to be charming when in reality, you’re a massive pain in the arse, you furry wanker.” She glared at him. “What do you want?”

“Our lovely mate wants to know if you’re bringing a date to the party.” Gareth’s grin widened to the point of making him look ridiculous. He grinned even wider when she commented on it. “No Mr. Narky Cougar in your life? Should we hire someone?”

“If there was, do you honestly believe I’d introduce him to a bunch of prats like you?” She flipped him off and continued down the hall toward the elevators. If she made it into one, she’d be safe from harassment of the male variety for the rest of the day. Her eyes narrowed on the wolf standing in the elevator when the doors opened, and she snapped at him before he could say anything. “I don’t want to hear about your day or my day or my sweater. Go away, the lot of you.”

Steven raised his hands in surrender while sidestepping out of the lift to avoid Elaine brushing against him as she refused to budge. “Who was it this time?”

“Does it matter? They are all blithering idiots.” Elaine dodged past him inside the lift and hurriedly smacked the button for the first floor. She leaned against the inside wall with a sigh of relief when the doors closed. “Arsey bastards.”

There were things within the realm of impossibility which Elaine Gibbs had long ago decided would never happen for her. She was a ‘mate’ in the ‘share a pint while playing video games’ kind of sense, not in a ‘naked in the shower’ or ‘under the covers’ sort of way. She wasn’t certain a man existed who could see past her often-prickly personality.

She didn’t think love would ever happen for her, though just sex might be nice for once. It was the downside of being the lone cougar shifter in all of Europe—and being beyond socially awkward. She wasn’t exactly opposed to seeing someone who wasn’t a cougar or a shifter.

And it was Christmas time.

Elaine glared at the repulsively bright decorations in the hallway which had been brought in earlier. They twinkled, which seemed highly unnecessary in her opinion. She’d taken to wearing her sunglasses in the office to avoid having to squint all day. The blinking lights, merry music and blasted cinnamon candles were overwhelming her senses and giving her a ruddy migraine.

She loved her alphas’ brunette fiancée, but the woman was too damn cheerful. All Elaine wanted was to indulge in a good holiday sulk and maybe thrash Josh and Darren on the digital battlefield after work. She always felt so much better when she’d trounced the two mangy bastards. The men were like big brothers—annoying prats who never went away.

Every year the Blackbird pack had a small Christmas party which usually involved a lot of ale, mince pies and very little in the way of actual holiday paraphernalia, but Ivy had decided it should be a proper do this year. It meant Elaine had twelve days to find an iron-clad excuse to blow the whole thing off. She didn’t like her chances.