Saints and Sinners front man, Jarrod Banks, has the looks and the voice that make women swoon, and he knows how to take advantage of every lyric and every wink. Not used to having to fight for the attention of an attractive woman, he can’t help but be drawn to his publicist, Patricia, who refuses to play his games. She’s the one woman whose love he’s going to have to earn and he’s not afraid to fight dirty.Even managing a rowdy group of music sensations, Patricia Monroe is the consummate professional. For five years, she has kept her attraction to Jarrod under wraps, enduring his endless supply of women, but one day when locked in an elevator, revelations are made that could change it all.

When their relationship is put to the test, Jarrod is left with no other option than to pull every dirty trick in the book to show her she’s the only woman he’ll ever love. 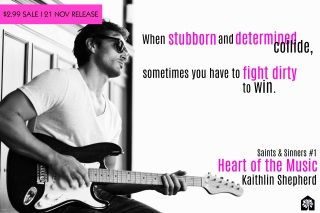 The moment she spotted him, she reminded herself that this was business and she couldn’t let herself lust after this man. For heaven’s sake, she didn’t even know his name.
As she walked toward him, he turned around at the sound of her clicking heels. When their eyes met, she stopped dead in her tracks. The intensity she’d seen in the man on stage was nothing compared to his intensity right now.
With a heart-stopping smile, he greeted her. “Hi.” His voice was soft and raspy, like a well-aged scotch you’d want to enjoy down to the last sip. He held out his hand to her. “I’m Jarrod.”
So, her fantasy man’s name was Jarrod. “Patricia.”
“So, Patricia, what can I do for you?” Sexual innuendo filled his voice, and judging by the flicker of lust in his eyes, he meant it that way. She could only imagine the kind of indecent proposals this man received on a daily basis.
“You guys are really good,” she managed to say, without sounding like a complete idiot. Having this kind of instant reaction to someone was new for her. She didn’t know why, but there was something about him that drew her forward. He was like a magnet pulling her closer and closer.
“Thanks. So, I’ve never seen you around at any of our shows before. Is this your first time?”
She wondered how many women had done exactly what she was doing right now.
Heat caressed her cheeks as she reeled in her lust and dirty ideas before they got the better of her, and answered, “It was. Thanks for making it painless.”
“Always happy to pleasure a beautiful woman.” Somehow, she didn’t doubt that for a minute.

Facebook I Twitter I Website I Publisher
Kaithlin Shepherd was born and raised in Canada where she learned to figure skate and crafted a love affair with coffee. Growing up in a household filled by strong-headed women, she learned early on that life is what you make it. You’ve probably never met a bigger country music fan and in the words of Brooks and Dunn, she’s a die-hard ‘George Strait junkie.’ Constructing a world away from her real life, Kaithlin loves the feeling of creating a universe where her fans can forget about everything in their life. She loves writing about hot alphas and doesn’t shy away from turning up the heat with scorching hot sex scenes.