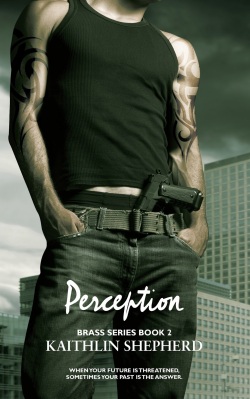 One look at Annabelle Stevens and no one would ever know she’s a top Assistant US Attorney. When a new boss assigns her to an elite DEA-led task force, she’s put in close proximity to the one man she can’t shake: Connor Evans. For years, she’s been in love with him, and for years, he’s played yo-yo with her heart.Abandoned by his parents, tossed around from one foster home to the next until his best friend’s family took him in, Connor Evans is the proverbial bad boy with a badge. For more than ten years, he’s kept Annabelle at a distance, convinced that his kind of screwed-up doesn’t belong anywhere near her.

When one case muddles the line between personal and professional, mistakes are made. Connor has no choice but to step up if he wants to win her trust and her heart back.

Kobo I iBooks I Nook

Facebook I Twitter I Website
Kaithlin Shepherd was born and raised in Canada where she learned to figure skate and crafted a love affair with coffee. Growing up in a household filled by strong-headed women, she learned early on that life is what you make it. You’ve probably never met a bigger country music fan and in the words of Brooks and Dunn, she’s a die-hard ‘George Strait junkie.’ Constructing a world away from her real life, Kaithlin loves the feeling of creating a universe where her fans can forget about everything in their life. She loves writing about hot alphas and doesn’t shy away from turning up the heat with scorching hot sex scenes.