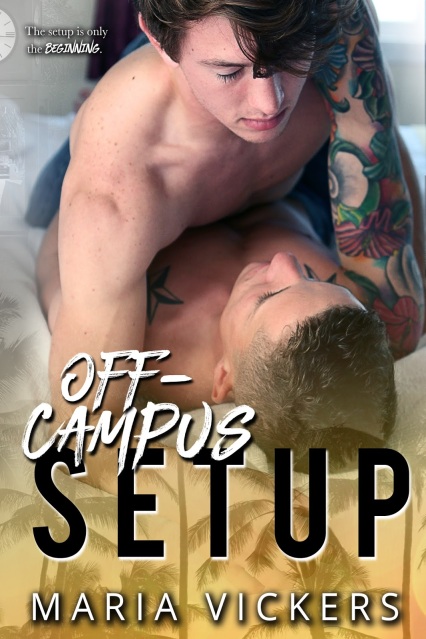 Levi Cox left it all behind to go to school in California, but nothing could prepare him for what he discovers when he gets there. Between the university screwing up his living arrangements, the weird meddling old woman who runs the boarding house, and the fellow student who instantly catches his eye, life in Cali is more than he expected, and he isn’t sure he’s ready for any of it. College was supposed to be an adventure, but this might be more than Levi can handle.
Nathan Orion wants to have fun. That’s what he lives for and it’s exactly what his college years are supposed to be about. He’s happy with living the single life and being carefree…that is until the new student at his grandmother’s boarding house crashes into his life. Now he’s been recruited to show the new guy around, and if Nathan has his way, it won’t be just on-campus.
Will there be more, or is this only an illusion? Two men thrown together, not expecting anything, but possibly finding so much more than an off-campus setup.
The setup is only the beginning. 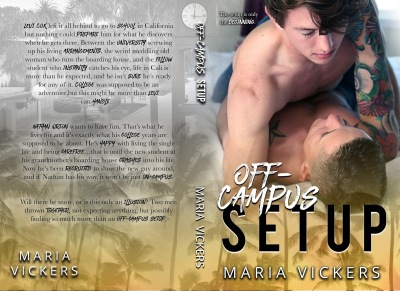 Right now, I wanted to drop my bags, fall into bed, and put my feet up. And a tank of oxygen might help too. ‘How did people in L.A. breathe?’ I wondered to himself more than once as I walked from building to building on campus, and then again on my excursion to this boarding house.

Made it to the door without collapsing. That in itself was an achievement. Raising my hand to knock, the door swung open before it made contact with the hard surface. And unfortunately, the stranger who had jerked it open, hadn’t been watching where he was going and barreled straight into me. It was then my legs had decided to quit on me and I fell to the ground with him on top of me.

Maybe it was the weather or the exhaustion—or it could have been those grey eyes hovering over me, captivating me—but damn, I could feel my dick getting hard as he struggled to get up and ground himself against me. My only saving grace was that he got up before he noticed. Pulling me to my feet and pushing me slightly to the side, he mumbled an apology and then left me standing there as he rushed down the stairs and into a waiting car.

“California hospitality at its finest,” I muttered under my breath. So far, I wasn’t impressed and transferring after this semester was beginning to look better and better. Bruised ego, bruised tailbone, and legs of jello did not make for a happy Levi no matter how captivating the stranger was.

“Don’t mind him. He’s just a little pissy because I wouldn’t give him what he wanted. I swear that boy is too spoiled for his own good. Then again, I take some responsibility for that. Kind of my fault for indulging him.”

I turned my head and found an old woman with her hair dyed yellow. Not blonde…it was canary yellow. I squeezed my eyes shut to temporarily shut out the blinding color and focused on what she said. What was she talking about? Could it be that she was his sugar mama? I’d heard of such things happening from T.V. and magazines, but I didn’t realize things like that were real. I’d never met someone like that. “Ma’am?” I asked for clarification because maybe I was wrong. 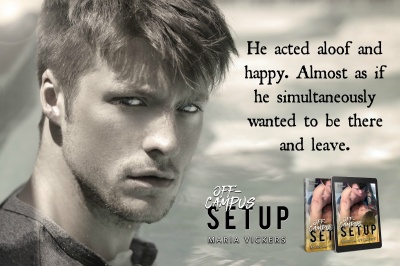 Maria Vickers currently lives in St. Louis, MO with her pug, Spencer Tracy. She has always had a passion for writing and after she became disabled, she decided to use writing as her escape. She loves to write romance of all kinds because she is a dreamer and hopeless romantic at heart.
❤✨ From the Author ✨ ❤
Life is about what you make of it. You have to live it to the fullest no matter the circumstances.
I have always loved books. Not only creating the stories, but reading them as well. Books transport me, and when I was younger, I would run into walls because I refused to put my books down even for a second. Take note, walking with books is not advised. LOL.
With my books, I just want to share my stories with the world. I want others to be transported or to feel the emotions my characters feel. That is my goal with my writing. If I can do that for one person, I succeeded.
Getting sick changed me and my life, but it also opened doors that I thought were closed. Today, even though I cannot do much, I still have my mind and I can write. 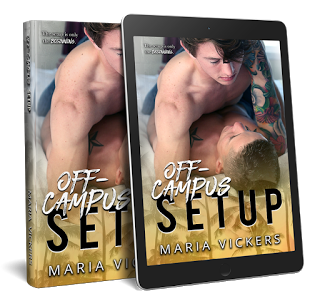