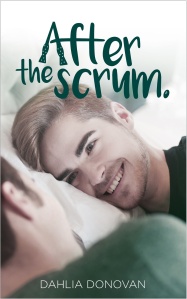 Caddock ‘The Brute’ Stanford lost his brother and rugby career within the same year. The once man-about-town is now a has-been and guardian to his young nephew. Not sure where life will go after the scrum, he decides to purchase a pub in the Cornwall village of Looe. He never expects to fall in lust—and then love.

Francis Keen hides his crippling anxiety behind his eccentric habits, lush interior design, and beloved dog, Sherlock. Alone by choice after an attack in college left him emotionally scarred, he lives by the sea with his gran, resigned to working small jobs for local businesses. Revamping the pub for the new owner is right up his alley—especially when he realizes who the owner is.

Two men, so different, on track for a romantic collision. Can they survive the impact?

“There are few, if any, faults to find in this book. Dahlia Donovan crafted a lovely, overwhelmingly believable romance in After the Scrum that was a true joy to read.”
Originally critiqued by the staff of Authors Talk About It for Book Award Contest.

Forty. Retired. And a father.  Now what?  The infernal question rolled around in his mind and kept him up late at night.  Devlin deserved the best care one could provide.  A moping mountain wouldn’t do the lad a damn bit of good.  He needed a restart—a scrum—to deal with life after rugby.

Starting toward the kitchen to make a coffee, Caddock sighed when a familiar voice called out, “Uncle Boo!” Since Devlin started to speak, he’d tried to teach the lad to call him Uncle Brute.  It backfired spectacularly when he became a bastardized version of his own nickname.

“Uncle Boo. Uncle Boo. Uncle Boo.” Devlin bounced into the kitchen clutching his favourite blue teddy to his chest.  He’d clung to it as the last toy his father had given to him before his trip to the Great Barrier Reef.  He waved the bear wildly, almost knocking himself over with his enthusiasm. “Blue wants bickies.”

“Does he now?”  Caddock crouched down to contemplate the bear seriously. “Custard or chocolate biscuits?”

“Choccy.” His little nephew grabbed his hand to tug pointlessly at him, trying to drag him toward the cabinet where his favourite biscuits were hidden on a top shelf.  They’d been moved up there when he discovered the little Devil could climb just about anything. “Pwease?”

“Oh no, not the magic word.” He lifted the boy up to sit on the counter.  “Just one now.  We’re having tea and sandwiches in a mo.”

“One.” Caddock had learned to be firm when sad blue eyes peered up at him.  Devlin could melt a bloody iceberg with his pout. “And a half.”